The recent UGLE Universities’ Scheme bi-annual conference, held in Bristol, was attended by W.Bro Philippe, W.Bro Ray, Bro Leo and Bro Chris, all of Hotspur Lodge No.1626, which meets at Fern Avenue Masonic Centre. After the conference they were also joined by Bro Elliott, who now lives in Bristol, for a catch-up over liquid refreshment. 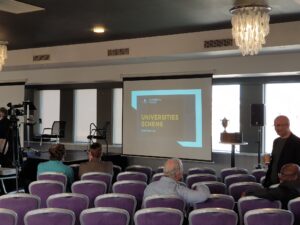 Over 150 delegates were welcomed to the event by the President of the Scheme, R.W.Bro Sir David Wootton. With over 90 lodges in England and Wales, 6 overseas and 7 Royal Arch Chapters, he outlined the key issues including the implementation of Grand Lodge initiatives reaching the Provinces with a structure that reinforces that Scheme Lodges and Chapters are part of their Province.

The Chairman of the Scheme, R.W.Bro James Hilditch welcomed delegates and introduced Dr David Staples, CEO and Grand Secretary, who outlined his background as a clinician and consultant and why he agreed to become Grand Secretary. As a problem solver he saw the opportunity as a great challenge and feels that a lot of positive progress has been made in recent years with the public perception of Freemasonry in this country. He introduced Michelle Worvill, Director of Communications and Marketing, who has spearheaded, and implemented, the changes to the way UGLE presents itself to its members and the public in general.

The President and Chairman gave closing comments and hoped all had found it a very interesting and stimulating conference.